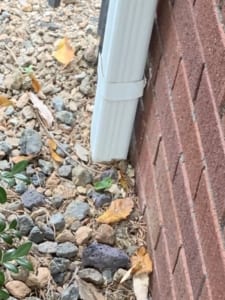 Buried downspout with a hidden connection. A common point of failure. 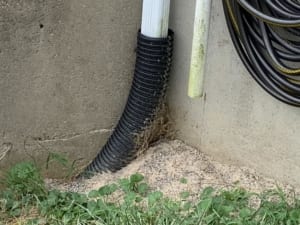 A solid run piece of corrugated tile is best.

There are a couple of things to consider when assessing buried downspouts. First, what is the best material used below ground? The best choices would be a single run of solid corrugated tile (the black flexible pipe with ribs) or glued-together 4″ or 6″ PVC sections. Often I will see corrugate tile but in a manner that looks like it was pieced together below ground. The issue with this approach is that the sections will pull apart, especially within the first few years as the earth settles. Then water will be allowed to distribute against the foundation unbeknownst to you, the homeowner. Another observation I will often make is when perforated tile is used. The problem here is that perforated tile is designed to go at the base of the foundation, covered with rock and a filter screen, to allow what water does make it that far to enter the tile and be transported quickly away from the home. A last resort. Using it as a drain only allows the water to distribute in the one area we are trying to avoid. Many times, a builder will tie the downspouts in with the perimeter drain. This is problematic because it introduces a large amount of water around the foundation when the intent is to avoid this at all costs. 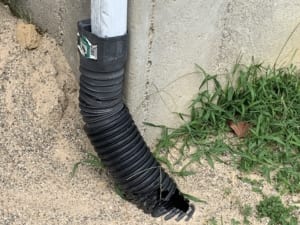 Often there will be damage. Sometimes the damage is not visible like seen here.

A couple of other things to consider. Often the ground around a house will settle in the first few years. Inevitably this movement will pull the buried drains away from the downspouts, and the runoff will distribute around the foundation. I see this scenario several times a week. The cheap accordion-style extensions are not rated for buried use. They are not recommended and will often fail. Make sure the proper materials are used when burying a downspout.
In summation, buried downspouts are fine as long as they are installed correctly. Solid single runs of black tile or PVC are ideal and less likely to fail. Allowing for the inevitable settling within the first few years is also prudent. Finally, ensure the discharge locations are observable so you can check to see if they are working correctly.

Most Common Issues with Dishwashers